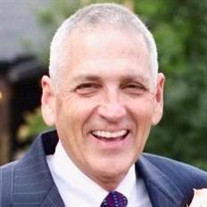 Ronald Eugene Wilson of Columbia, TN was promoted to the heavenly worship team on March 24, 2022 at the age of 70. Ron was born on June 22, 1951 in Indianapolis, Indiana to Travis and Wilma Wilson. Ron attended Northwest High School in Indianapolis. Ron was a man of many talents. He spent the early part of his career attending barber college and cutting hair before transitioning into the food packaging industry. He worked in sales in various leadership roles for the next 40 years in this industry concluding with his last 15 years at Southern Champion Tray in Chattanooga, TN. He retired from Southern Champion at the at of 69 feeling honored and grateful to have been a part of advancing a Christ principled business. Ron married his high school sweetheart, Luana Marie Wilson, in 1970. Ron and Luana spent the next 51 years making a life together. He enjoyed spending time with his family as well as playing golf, basketball, and watching sports. At the age of 50, he became an avid runner completing 11 full marathons including the Boston Marathon twice as well as more than 20 half marathons. Ron loved singing at church and had a passion for loving God through worship and giving to others. He enjoyed a good laugh with family/friends and didn’t mind watching a good movie on a regular basis. Additionally, Ron loved animals and his house was often filled with the patter of paws or barks from his furry buddies. Ron was always compelled to be honest about his life and be an example to others of an imperfect guy seeking to please the Lord. He wasn’t one to candy coat but sought to help by being real about his own challenges while still pursuing being the man he believed God called him to be. One month before dying, Ron commented that his goal for the remainder of his life was to love and honor his wife, Luana, better than previous years because she was worthy of that from him. He said if he accomplished that before dying, he would be a happy man. Surviving are his wife, Luana Wilson; his sons, Brent Wilson and Kent Wilson, his lovely daughters in law, Mary Lark Wilson and Jill Wilson as well as four wonderful grandchildren that he adored – beautiful Anna Grace, Ruthie, Elizabeth and his handsome grandson Zeke. Additionally, he is survived by his sister Judy Woods and husband Bob Woods as well as their children and grandchildren. There will be a Celebration of Life Service on April 9, 2022 at 2pm cst. at Central Christian Church (701 Bear Creek Pike, Columbia, TN 38401) in Columbia, TN. In Lieu of flowers and because Ron was a big dog lover, Memorial donations may be made in Mr. Ron Wilson’s name to the dog rescue organization Wags & Walks at this link: https://www.wagsandwalks.org/donate-nashville.

Ronald Eugene Wilson of Columbia, TN was promoted to the heavenly worship team on March 24, 2022 at the age of 70. Ron was born on June 22, 1951 in Indianapolis, Indiana to Travis and Wilma Wilson. Ron attended Northwest High School in... View Obituary & Service Information

The family of Ronald Eugene Wilson created this Life Tributes page to make it easy to share your memories.

Ronald Eugene Wilson of Columbia, TN was promoted to the heavenly...

Send flowers to the Wilson family.