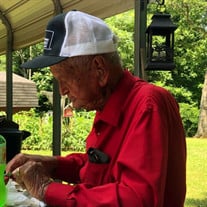 Russell Waldrop, 94 of Mt. Pleasant, passed away on Monday, August 16, 2021. Russell loved his garden, cows, mowing his yard and being outside in the hottest part of the day to get his work done. He was intrigued by salt and pepper shakers. Not plain and boring ones but thousands of different kinds and he never had more than one of the same set! Everywhere he went, he was on the prowl for more salt and pepper shakers to give to his family and friends. His family would ask him where he had been and what he had been doing and he would say “Ain’t been nowhere”, even though he was always going and doing. He was strong-willed, hard-working, and a hard-headed Waldrop. He never met a stranger. He simply loved life, his family, and his friends. Russell was a veteran and proudly served the United States Army in the Korean War. In 1978, he was the second employee hired and to eventually retire from Smelter Corporation in Mt. Pleasant. He was a member of Spencer Hill Church of Christ. Russell was preceded in death by his: wife, Evelyn Waldrop; parents, M.L. and Haughty Waldrop; ten brothers and sisters: Martin, Nellie, Roy, Jack, Brownie, Viola, Howard, Dot, Jessie, and Geneva. He is survived by his: son Michael (Melody) Waldrop; grandson, Daniel (Angel) Waldrop; granddaughter, Nicole (Corey) Beckum; great-grandson, Aiden Adams; brother, W.C. (Carolyn) Waldrop, several nieces and nephews, one special next-door neighbor, Mr. Wayne Thomas, and the girls from Campbellsville Café. The funeral service for Russell will be on Thursday, August 19, 2021, at 3:00 pm at Williams Funeral Home in Mt. Pleasant with Jeff Waldrop and Randy McNeece officiating. Burial will follow in Arlington Cemetery. The family welcomes family and friends for visitation on Wednesday, August 18, 2021, from 4:00 pm until 9:00 pm. Pallbearers will be: Steve Wright, Robbie McNeece, Mark Waldrop, Daniel Waldrop, Corey Beckum, Michael Casey Woodard, Troy Lanier, and Keith Matheny. The men at Spencer Hill Church of Christ will serve as honorary pallbearers. Military honors will be provided by the American Legion Post 19. Williams Funeral Home is assisting the family with arrangements. Condolences may be sent to the family online at www.williamsfh.com.

Russell Waldrop, 94 of Mt. Pleasant, passed away on Monday, August 16, 2021. Russell loved his garden, cows, mowing his yard and being outside in the hottest part of the day to get his work done. He was intrigued by salt and pepper shakers.... View Obituary & Service Information

The family of Russell Waldrop created this Life Tributes page to make it easy to share your memories.

Russell Waldrop, 94 of Mt. Pleasant, passed away on Monday, August...

Send flowers to the Waldrop family.