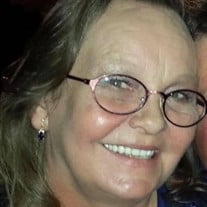 Shelia Faye Plant, age 63, passed away at Maury Regional Medical Center in Columbia, Tennessee on October 10, 2021. Shelia was born on March 2, 1958, to the late Ray and Margaret “Hood” Johnson in Maury County, Tennessee. Shelia was a caring and loving soul. She welcomed everyone into her life no matter what their background would be. Shelia touched a lot of people as she would for whoever called her. She spent as much time as she could with her family and especially her grandchildren. Shelia was a devout Christian and was a member of Destiny Church. She had the time of her life being part of a church that welcomed everyone and treated them like family. Shelia was a dedicated mother and grandmother. She raised five hardheaded boys that took after her. Sheila had the best smile and would light up the room when she would enter. Shelia is survived by her loving husband of 16 years, Ronald Plant; children: Jeremy Hughes (and four children), Jason Hughes (Kerri and 3 children), Aaron Hughes (Jessica and 3 children), Christy Zank (Brian and one child), Bobby Kergan (Meredith and 2 children), Ronald Edward Plant (Chelsea), Tim Hughes (and 1 child), and Kris Hughes (Christine and 4 children); and brothers: Danny Johnson and Doug Johnson. Shelia is preceded in death by her parents and sister Virginia Johnson. Sheila’s family will receive friends on Wednesday, October 13, 2021, from 4:00 PM 8:00 PM at Williams Funeral Home in Columbia, Tennessee. A service for Shelia will be held at 10:00 AM on Thursday, October 14, 2021, at Williams Funeral Home in Columbia, Tennessee with Pastor Steven Morgan officiating. Burial will follow at Polk Memorial Gardens. Pallbearers will be: Jeremy Hughes, Jason Hughes, Aaron Hughes, Bobby Kergan, Edward Plant, Tim Hughes, Brian Zank, and Kris Hughes. Honorary Pallbearers will be the members of Destiny Church. Williams Funeral Home is assisting the family with arrangements. Condolences can be given to the family at williamsfh.com.

The family of Shelia Faye Plant created this Life Tributes page to make it easy to share your memories.

Send flowers to the Plant family.