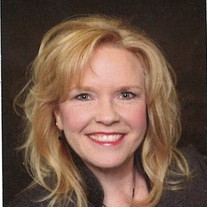 Terri Lea Rutherford passed away at her home in Columbia, TN on November 18, 2020 after a courageous battle with cancer. Terri was born on December 29, 1964 in Roanoke, Virginia to Jerry and Ramona Hollandsworth. Terri was a beautiful, loving, kind, and generous person who prided herself on working hard. In earlier years, Terri was the lead singer, drummer and road manager for the band with her siblings, The Hollanders. Terri later moved to Nashville to begin her career in Real Estate. Terri was the Owner/Broker for 2 Remax locations in the Nashville area including Fine Homes Property Management. During a 27 year career, Terri won many prestigious awards for Remax including: Chairman's Club, Diamond Club, the Hall of Fame and the Lifetime Achievement Award. Terri was well known for her integrity, her commitment, and her dedication to people and for a job well done which endeared her to anyone who came into contact with her. Terri was preceded in death by her mother, Ramona Hollandsworth. She is survived by her husband, John Rutherford and two sons, Justin (Elise) of Jay, OK and Jody Rutherford and Emma Curtis of Columbia, TN; father, Jerry Hollandsworth of Columbia, TN; brothers Jeffrey (Kathy) of Columbia and David (Angela) Hollandsworth of LaVergne, TN; sisters Susan (Paul) Adams of Cincinnati, OH, Janet (Mark) Means of Fort Myers, FL, and Brenda (John) Murphy of Virginia; mother-in-law, Diane Rutherford; brother-in-law, Tony (Misty) Rutherford of Jay, OK; sister-in-law, Annetta (Shane) Clark of Southwest City, Missouri; many well loved nieces and nephews; as well as her boys, Linus and Zeus. The family will be receiving friends at Williams Funeral Home in Columbia on Friday November 20, 2020 from 4-8 p.m. Service will be held on Saturday November 21, 2020 at 1 p.m. with a visitation one hour prior. She will be laid to rest at a later date at Indian Creek Cemetery, in Indian Valley Virginia. Williams Funeral Home is assisting the family with arrangements. Condolences can be given to the family online at www.williamsfh.com.

Terri Lea Rutherford passed away at her home in Columbia, TN on November 18, 2020 after a courageous battle with cancer. Terri was born on December 29, 1964 in Roanoke, Virginia to Jerry and Ramona Hollandsworth. Terri was a beautiful,... View Obituary & Service Information

The family of Terri Rutherford created this Life Tributes page to make it easy to share your memories.

Terri Lea Rutherford passed away at her home in Columbia, TN...

Send flowers to the Rutherford family.