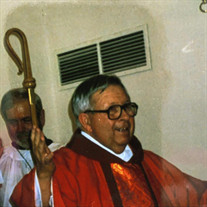 Thomas Jean Cairns of Columbia TN., passed into the arms of Jesus, Thursday, July 15, 2021 at the age of 92. Tom was born to Jean Harold Cairns and Olive Anderson Cairns, on March 24, 1929., of Rice,MN, who along with many other relatives, preceded him in death. Tom is survived by his wife of 64 years, Vicky Morgan Cairns of Columbia, TN; son Thomas Morgan Cairns of Fairview,TN and daughter Meridith Cairns-Mellen of Columbia, TN.; brother Patrick Cairns (Sharon) of Rice, MN; sister Mary Cairns Engberg (Gary) of Thompson’s Station, TN; granddaughter Katie Cairns and grandson Christopher Mellen and great grandchildren Caleb, Ashley, Courtney, Keira, and Kara, all of Maplewood, MN and nephews and nieces Dan Cairns (Ellie), Debbie Erdmann (Lloyd) all of Rice, MN; Mark Cairns (Kelli), Mike Engberg (Becky), Andrea Keller and Heather McGee (Chad) all of Franklin,TN and cousin Mary Lou Arne of Willmar, MN.and numerous other loved ones. Tom grew up in Minnesota. He went to elementary school in Rice, and then attended St. Cloud Tech, and St. John’s University, Collegeville, MN. He later received his Master’s Degree from The University of Minnesota, St. Cloud. Besides Tom’s passion for his Lord Jesus Christ and for his family, he had two very keen, lifelong, interests: The first, was an early interest in trains, which he could watch from their house. At that time, the school children walked across the tracks to get to the school, and Tom was soon exploring the Depot and looking over the trains that would park on the side track while another train passed. Soon after that, Tom became a “regular”, and the men on the trains took a liking to this young kid who loved trains so much! Soon engineers were giving him rides in the steam engines, as they switched back and forth on the tracks. When there weren’t trains to entertain him, he loved hanging around the Train Depot, learning the telegraph system, etc. As Tom matured, he continued to have this passion for trains and his interest became much more sophisticated and he became quite an expert about trains! Later in life, Tom developed the hobby of collecting beautiful model trains and would build great topographical scenic track layouts, complete with landscaping , signals, villages, etc. Probably an even greater passion was Tom’s love of Labradors! In his later teens he started his own notable business, “Onyx Kennels of Rice”, again something he pursued with fervor, and while still a teenager, raised and trained, and then won the AKC National Championship Best of Breed (Labrador), with Onyx King of Rice, and was well on his way to winning a rare dual championship , this time in field trials, when the Korean War broke out and Tom enlisted in the US Air Force. He was almost immediately sent to Officers’ Training School, in San Antonio, then served many years in England as an Intelligence Officer, traveling back and forth to European NATO countries and also North Africa. It was there in England that he met and married his beloved wife Vicky, in May of 1957. Tom left the Air Force and for several years was still a Captain in the Reserves, and it was then that he pursued his Master’s Degree and worked for the State of Minnesota. Eventually, his love for Jesus, led him to study once again, this time for the priesthood as an Anglican Priest. He served in parishes in Minnesota, Wisconsin, Florida and Tennessee. In retirement, he and Vicky became members of St. Catherine of Siena Catholic Church in Columbia. A Memorial Service will be held at Williams Funeral Home on July 20, 2021 at 2:00 PM with Reverend Walter Clot officiating. A fellowship with friends will be held after the services. In lieu of flowers, donations would be preferred. Williams Funeral Home is assisting the family with arrangements. Condolences can be made at williamsfh.com

Thomas Jean Cairns of Columbia TN., passed into the arms of Jesus, Thursday, July 15, 2021 at the age of 92. Tom was born to Jean Harold Cairns and Olive Anderson Cairns, on March 24, 1929., of Rice,MN, who along with many other relatives, preceded... View Obituary & Service Information

The family of Thomas Jean Cairns created this Life Tributes page to make it easy to share your memories.

Thomas Jean Cairns of Columbia TN., passed into the arms of Jesus,...

Send flowers to the Cairns family.