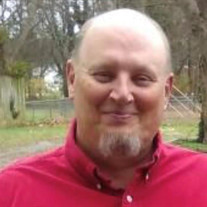 Tony Edward Curtis, age 62, was called home by his Heavenly Father Tuesday, October 5, 2021, at North Alabama Medical Center. Tony was born April 23, 1959, in Lawrenceburg, TN to the late Ben W. Curtis and Irene Reed Davis. Tony at a young age felt a calling. He answered his Lord at the age of eighteen began sharing God’s word. From that moment on and for the rest of his life Tony followed the Lord’s guidance and shared his word pastoring at several churches along the way. Most recently Tony served at Summertown Community Church. Tony’s faith shaped his life. He lived what he preached, he embraced God’s love and shared it readily with anyone and everyone. But it was more than sharing his word, at the drop of a hat Tony would be out the door to go pray with a family, even in the middle of the night. He was a committed prayer warrior and would put his faith into action to show up for others or help anyone he could in need. When Tony wasn’t in the pulpit if the season was right he was either hunting or fishing. Often, while sitting in his tree stand, he would utilize that time to talk to God and find his inspiration for his coming Sunday sermon. Tony truly enjoyed spending time with family fishing or patiently waiting for the shot at a monster Buck. Tony enjoyed the quiet excitement of being an outdoorsman, but he also loved to talk to people. He never met a stranger and loved to get to know people and pray for them. He also was always willing to share his musical gifts with others as well. He could sing well and play almost any musical instrument. He always had a knack for music and taught himself all of them, except he always struggled a bit with the Violin. He was also a loving devoted husband, father, Popa, and son with whom he shared all of his love, passions, and gifts with. Tony was a bright light in this world, he loved deeply and is loved in return, he will be dearly missed. Tony is survived by his wife: Brenda Paul Curtis; children: Derrick Curtis, Charity (Phillip) Tucker, Cayce (Patrick) Sims, and Candace Henderson; grandchildren: Braden Curtis, Gage Lovett, Kali Lovett, Dayton Owens, T.J. Fish, Lilyana Henderson, Joshua Parham, A.J. Wood, Kara Sims, Selena Smith, Haley Tucker, and Landon Tucker; mother: Irene Davis; brothers: Terry (Shannon) Curtis and Will (Deborah) Davis; father-in-law: Gerald Paul; sister-in-law: Diane (Walter) Musick; and special friends: Herb & Mary Rochelle; and many aunts, uncles, nieces, nephews, cousins, and friends. Tony was preceded in death by his father: Ben Curtis; step-father: James Davis; son: Brett Curtis; sisters: Vicky Curtis and Taffy Davis; mother-in-law: Joyce Paul; and sister-in-law: Sandra Scott. The family will receive friends from 12:00 p.m. until 3:00 p.m. Friday, October 8, 2021, at The Tabernacle in Summertown, Tennessee. Services will begin immediately following visitation at 3:00 p.m. with Brother Ricky Pitts officiating. Burial will follow at Arlington Cemetery in Mount Pleasant, Tennessee. Pallbearers will be: Dayton Owens, A.J. Wood, Phillip Vandiver, Chris Henson, Gage Lovett, Danny Chalk, Derrick Curtis, and Phillip Tucker. Honorary Pallbearers are: Summertown Community Church Members, Wayne Harris, Timmy Davis, Raen Henderson, Walter Musick, Gerald Paul, Jim Highsmith, Steve Mangrum, all of his hunting and fishing buddies, and all of his fellow servants in ministry. Williams Funeral Home is assisting the family with arrangements. Condolences can be given to the family online at www.williamsfh.com

The family of Tony Edward Curtis created this Life Tributes page to make it easy to share your memories.

Send flowers to the Curtis family.