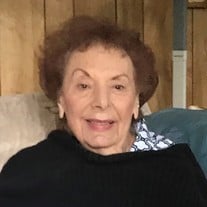 Vincetta "Jeanne" Polk, 93, of Columbia, Tennessee, died Sunday, November 1, 2020, peacefully at home. She was born and raised in Newark, New Jersey and the oldest of three daughters. She married Rick Polk on April 24, 1949. They lived in Fords, New Jersey until 1973, when they moved to Columbia, Tennessee, where Rick owned the plant PA Medical. After Rick passed away in 1978, Jeanne ran the company for ten years. It was rare for a woman to hold such a leadership position and Jeanne did so with the utmost professionalism. Jeanne was an amazing woman with a vibrant personality and positive outlook on life. She and Rick had many adventures roaming the skies in their private plane and Jeanne was proud to have earned her own pilot's license, which was an extraordinary accomplishment for a woman at that time. Her love of travel continued as she and her sister Jo Ann went on many cruises to faraway places, including the Mediterranean, the Caribbean, and throughout Europe. She even traveled to Egypt with her niece Sharon, climbing every step of the Great Pyramid to the top. Family meant the world to Jeanne and she returned to New Jersey each year for Christmas. She and Jo Ann took their traditional trip to New York City to see the Rockefeller Center Tree or Radio City Rockettes and had lunch overlooking the holiday lights of Times Square. Family gatherings were filled with food, fun, and warmth. Everyone looked forward to Jeanne coming home. Jeanne had a beautiful smile and an upbeat nature along with her sparkling laugh and witty sense of humor. She loved music and was quite the dancer, often going to Nashville for plays and concerts. She enjoyed cooking and experimenting with new recipes. She had a strong faith in God and deep connection to her church. She brought bright light, love and laughter to all those who were fortunate enough to know her. She was preceded in death by her husband Rick, her parents: John Romano and Carmella Oliveri Romano; her sister: Jo Ann Badal; her niece: Linda Jean Mazurek. She leaves behind her sister: Frances Gonnella; her niece and godchild: Sharon Lee Badal; her stepson: Rick Polk- Simpson; nieces: Martha Talent, Gina Bartz, and Diana Maisto; nephews: Michael Gonnella Jr., and Gregory Mazurek; great-nieces: Noelle Capri Mazurek, Angelina Gonnella; and great-nephew: Michael Gonnella. Visitation for Jeanne will be held on Wednesday November 4th from 5-8 p.m. at Williams Funeral Home in Columbia. A graveside service will be held on November 5th at 10 a.m. at Polk Memorial Gardens. Special thanks to Compassus Hospice and Mike and Beverley Hicks, her "Earth angels". Williams Funeral Home is assisting the family with arrangements. Condolences can be given to the family online at www.williamsfh.com.

Vincetta "Jeanne" Polk, 93, of Columbia, Tennessee, died Sunday, November 1, 2020, peacefully at home. She was born and raised in Newark, New Jersey and the oldest of three daughters. She married Rick Polk on April 24, 1949. They lived in... View Obituary & Service Information

The family of Vincetta Jean Polk created this Life Tributes page to make it easy to share your memories.

Send flowers to the Polk family.