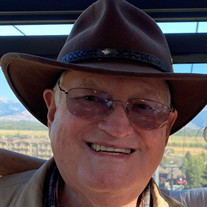 Wally Couch went to be with his Lord and Savior on, September 9, 2021. Wally was born in Mt. Pleasant, TN, just ten miles southwest of CMA. He was the youngest of four children. Wally’s father was a 5 & 10 Dime Store Merchant in Mt. Pleasant for forty years. In 1954 Mr. Couch sent his boys, Jimmy and Wally to Columbia Military Academy, Wally graduated in 1962. Wally spent eight years at CMA Wally loved CMA and could have made a career of it. Wally went to Lambuth College. He was at Lambuth for five years majoring in Biology and History. He met his lovely wife Karan at Lambuth and they have been married for 54 years. After leaving Lambuth, Wally went to work for Memphis Park Commission as the assistant to the director of the Memphis Botanical Gardens, he later moved over to Code Enforcement for the City of Memphis. He would be enforcing the Housing and Environmental Codes. He was promoted to senior inspector in 1980 and 1983, promoted to Court Coordinator representing the Dept of Code Enforcement in General Session Court. He finished his career in Memphis with the Memphis Fire Department enforcing new codes. He retired in January 1997. He returned home to Mt. Pleasant, TN, going to work for the Maury County Building Department as an inspector for 15 years. This ended his 42 years of public service in Code Enforcement. CMA had served him well, teaching him dedication, integrity, and loyalty. He spent his time with his daughter and three granddaughters in Memphis and his son and three grandsons in Idaho. His celebration of faith will be held on Monday, September 13, 2021, at First Methodist in Mt. Pleasant at 11:00 a.m. with Ron Jones officiating. Visitation will be held one hour prior to service time. Wally is survived by his wife, Karan Couch; children: Ginger (Mel) Velasquez, Wallace (Abby) Couch Jr.; grandchildren: Ginny Paige Velasquez, Rachel Velasquez, Joy Velasquez, Charlie Couch, John Couch, Henry Couch; siblings: James Couch, Matilda Beaird, and Ginger Harlan. Williams Funeral Home is assisting the family with arrangements. Condolences can be given to the family online at www.williamsfh.com.

Wally Couch went to be with his Lord and Savior on, September 9, 2021. Wally was born in Mt. Pleasant, TN, just ten miles southwest of CMA. He was the youngest of four children. Wally&#8217;s father was a 5 & 10 Dime Store Merchant in Mt. Pleasant... View Obituary & Service Information

The family of Wally Couch created this Life Tributes page to make it easy to share your memories.

Wally Couch went to be with his Lord and Savior on, September...

Send flowers to the Couch family.