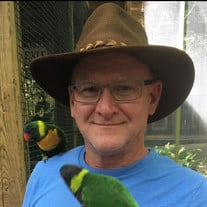 Walter “Wally” F Grimes, Jr, also known as “Daddo”, of Mt Pleasant, passed from this earthly life November 23, 2021, after a short battle with brain cancer. Wally was born October 7, 1966 to the late Fariss and Patsy Grimes of Mt Pleasant. At an early age Wally had a love for motor bikes, motorcycles, Harley Davidson’s in particular and fast cars or anything that had an engine. He loved testing out anything with an engine to see just how fast it would go or how much smoke he could make doing a burn out, and then listen to his scanner to see when the call came in for the police to come check it out and then he would sneak back home and park it. Wally was not one for dressing up, you either liked what he had on or he didn’t care. You never had to wonder where you stood with Wally cause if he liked you, you knew it and if he didn’t, well you probably knew that too. Wally met his wife Nora Lynn Grimes on November 24, 1990, when after 3 days of waving at her as she drove by his work place, she pulled over and talked to him, and that start their journey together. Wally and Nora were married on February 14, 1997. Wally was always a hard worker, managing the Mt Pleasant Car Wash for 20 years and was a dedicated employee of the City of Mt Pleasant. Wally’s happy place was his home in Southport, where he worked tirelessly. He always dreamed of an “A” frame house with a little pond in front of it. Wally worked til he got his dream and found his favorite hobby in the process “fishing”. Wally had a deep love for animals and there wasn’t an animal he could not catch and pet. From snakes, lizards, and chipmunks, to grabbing and holding down a live shark on a vacation trip to Biloxi MS, so the fishermen who caught it could cut their line cause they were to scared to grab it, Wally never backed down from handling one of Gods creatures. Wally was a “girl” dad, his first being to his niece Kayla Floyd Newson whom he adored and would swing her by her feet in the air and let her put glow in the dark glitter streamers all on his old car, from the mirrors to the wheels and being a “girl” dad, he never took them off. Wally and Nora had their first child a girl, Anissa Rose Grimes on September 12, 2003. Wally adored his little “Sugar Bugg” and taught her his love of animals, reptiles, bugs and how to defend herself. To which he put her in choke hold and told her to stomp his toe like you would if someone was trying to kidnap you and she did and broke his big toe. Wally and Nora had another girl, on June 16, 2014, Ziva Clair Grimes the answer to Anissa’s prayer for a sister was answered. Wally adored his “Lil Z” and taught her the same love of animals, reptiles, bugs, and creatures as he did Anissa. Wally had another daughter of the heart, Dorina Lynn Jackson, who may not be biologically his but in all respects acts just like him. Then came Emilynn Jean Jackson that he added to his group of “girls”. Wally will always be remembered as the best “Daddo” EVER! Wally obeyed the gospel of our Lord and Savior and was a member of the Halls Chapel Church of Christ. Wally is survived by his wife, Nora Lynn Grimes, 2 daughters, Anissa Rose Grimes and Ziva Clair Grimes. One Sister Angela (Bobby) Floyd, niece Kayla (Carl) Newson, Harper Newson and nephew Bryce Newson. Other family of the heart, Doris Jackson, Jimmy Lott and Barbara Burdette. Special thanks goes to Wally’s coworkers at the City of Mt Pleasant and to KCS Medical Group. A memorial service will be held at the Halls Chapel Church of Christ, at 7247 Polk Ln, Columbia TN, on Friday, November 26, 2021 at 2:00 p.m. with doors opening at 1:30 p.m., following the memorial, the family will be available to visit with family and friends til 5:00 p.m. No flowers please, in lieu of flowers donations can be made at any First Farmers and Merchants Bank to the “Anissa Rose and Ziva Clair Grimes” college fund.

The family of Walter Grimes Jr. created this Life Tributes page to make it easy to share your memories.

Send flowers to the Grimes family.