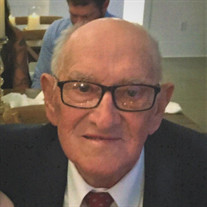 Wayne C. Hall, age 87, passed away at his home surrounded by family Friday, July 16, 2021. Wayne was born May 17, 1934 in Mount Pleasant, TN to the late Frank and Virginia Adams Hall. Wayne is a lifelong resident of Mount Pleasant. He graduated from Hay Long High School and honorably served in the United States Army. At the age of 20, Wayne married the love of his life, Christine Hall. They spent 67 wonderful years together building their life. Wayne devoted himself to his marriage and family. He was a wonderful husband, father, and faithful man. After discharging from the Army, Wayne went to work for Monsanto and stayed there 31 years before retiring. Wayne’s faith was always evident through his kindness and willingness to serve others. He was a long-time member and song leader at Porters Chapel United Methodist Church. Wayne loved music and also played in several bands throughout his life. True to his nature, Wayne would play at nursing homes and senior centers to lift up others. If there was someone on the side of the road he would always stop and help. He was truly a helpful and selfless person that was always there when you needed him. He used his life to glorify his God, raise his family with love and serve those around him. Wayne made the world a better place to be and he will be dearly missed. Wayne is survived by his wife: Christine Hall; son: Anthony (Margaret) Hall; daughters: Cheryl (John) Cook and Tammy Hall; grandchildren: William (Melissa) Dodson and Carrie (John) Ford; great-grandchildren: Hayden Dodson, Rachel Dodson, Gavin Ford, and Keaton Ford; brother: Jerry (Angela) Hall; Nephews and Nieces: Jeremy Hall, Mike Stokes, and Bobby Stokes, Linda Schipani, Mary Jane Montgomery, Pam Turner, Cindy Burns, Terri Crist, Robin Tripp, Glenda Carroll, Ray Carroll, Ronnie Carroll, Barry Hinson, Angela Rector, Vickie Williamson, Randall Young, Diane Walker, Jerry Young, Jeffery Hurt, Keith Hurt, and Mike Akers. Wayne is preceded in death by siblings Oklene Stokes and Margaret Moore. Special thanks to Chelsea, Pam, and Mike from Avalon Hospice The family will receive friends Sunday, July 18, 2021, from 6:00 p.m. until 8:00 p.m. and Monday, July 19th at 1:00 PM at Williams Funeral Home in Mount Pleasant. Funeral Services will be held Monday, July 19, 2021, at 2:00 p.m. at Williams Funeral Home in Mt. Pleasant with Eddie Watson and Bobby Gobble officiating. Military honors will be rendered by American Legion Post 19. Burial will follow at Arlington Cemetery in Mount Pleasant at a later date. Pallbearers are: Mike Stokes, Bobby Stokes, Buddy Dodson, Hayden Dodson, Jeremy Hall, and Mike Burns. Honorary Pallbearers are: Wayne Cates and the Men of Porters Chapel UMC. Williams Funeral Home is assisting the family with arrangements. Condolences can be given to the family online at www.williamsfh.com

Wayne C. Hall, age 87, passed away at his home surrounded by family Friday, July 16, 2021. Wayne was born May 17, 1934 in Mount Pleasant, TN to the late Frank and Virginia Adams Hall. Wayne is a lifelong resident of Mount Pleasant. He graduated... View Obituary & Service Information

The family of Wayne C. Hall created this Life Tributes page to make it easy to share your memories.

Send flowers to the Hall family.