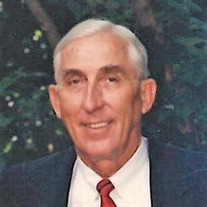 Wayne William Pagel, age 93, passed away Wednesday, December 8th, 2021 in Columbia, Tennessee. Wayne William Pagel, born in Thompson Station, Tennessee, on February 10, 1928, to the late Bertha Koone and Amos Alfred Pagel Sr. He was a member of Graymere Church of Christ, Society of the Sons of the Confederate, Sons of the American Revolution, and American Legion. On November 7, 1945, he enlisted in the U.S. Navy and served on the USS Wilkes-Barre, in a World War II peacekeeping force in Europe. While serving in the naval reserve at Georgia Tech he was recalled to active duty to serve on the USS Evans during the Korean War. He was employed by E.I. Dupont Company in 1952 and retired in 1981. He continued employment with Spontex Corporation until 1991. On June 27, 1953, he married Nancy Helen Hall. Their marriage lasted for 60 years until her passing in 2013. In 1963, he began his ministry at Halls Chapel Church of Christ and then served as a full-time minister at Philadelphia Church of Christ in Maury County, Roberson Fork, and then Fairview Church of Christ in Giles County. In 1966, he enrolled in the Nashville School of Preaching and graduated with perfect attendance. In addition, he preached the gospel at over thirty Church of Christ congregations throughout Middle Tennessee. During his 56 years of ministry, he and his wife, Helen conducted missionary work throughout the United States, Russia, Ukraine, and India. He was preceded in death by his wife: Nancy Helen Hall Pagel; sisters: Caroline Brown, Mary Fowler; brothers: Alfred Pagel, Vernon Pagel, Julius Pagel; grandson: Wayne W. Pagel III. He is survived by his sister: Rachel Underwood; children: Dena Lin (Tommy) Ray, Wayne W. (Lana) Pagel Jr., Tami Jo Pagel, Nathan (Beth) Pagel; grandchildren: Steph (Jaymi) Ray, Adam (Amanda) Ray, Rhea (Steve) Ashley, Helena Blair, Ariel (Josh) Birdwell, Jacob Pagel, Jackson Pagel, and Jaiden Pagel; great-grandchildren: Breanna Ray, A.J. Ray, Jaymes Ray, Drew Ashley, Eli Ashley, and Briar Rose Birdwell. The children and their descendants wish to acknowledge their fortune at having such loving, faithful Christian parents. The family will receive friends at Williams Funeral Home in Columbia on Saturday, December 11, 2021, from 10:00 AM to 1:00 PM, with the funeral service commencing at 1:00 PM. To follow, Wayne will be laid at his final resting place at Lynnwood Cemetery in Lynnville, Tennessee. Pallbearers will be Eli Ashley, AJ Ray, Nathan Pagel, Josh Pierce, Wayne Pettus, and Tony Townsend. Honorary pallbearers: Members of Graymere, Fairview, Roberson Fork Church of Christ. In lieu of flowers the family is asking donations to be made to Church of Christ Relief Fund, PO Box 111180 Nashville, TN 37222-1180, or to plant a tree in his memory. Williams Funeral Home is assisting the family with arrangements. Condolences can be given to the family by visiting www.williamsfh.com.

The family of Wayne William Pagel created this Life Tributes page to make it easy to share your memories.

Send flowers to the Pagel family.