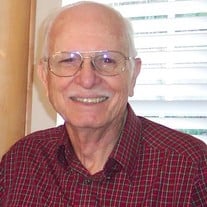 William "Buddy" Horace Hardison, Jr., age 88, passed away on December 25, 2020, in his daughter's home surrounded by his loving family in Columbia, TN. Bill was born February 29, 1932, in Columbia, Tennessee to the late William Horace Hardison, Sr. and Lou Willie "Lynn" Hardison. Bill Hardison has always been the warm and caring person that cared for everyone around him. He is a native of Maury County Tennessee, he left from there to join the Navy and honorably served during the Korean War. Bill retired after many years as a maintenance supervisor for Occidental. He was a faithful man that carried his Heavenly Father's compassion and devotion and shared them readily. He was a long-time member of Berea Church of Christ. Bill was a wonderful father, grandfather, and great grandfather, he was absolutely devoted to his family. To say that he was dependable is an understatement, he was always there when he was needed whether just to listen and lend his experience and advice or to repair something. He was quite the problem solver, whether mechanical or logistical he always had a keen mind and a knack for fixing things. He enjoyed fishing and being on the water, or at the beach, however, it truly didn't matter what he was doing as long as he was alongside his family. Bill's kind nature and loving disposition will be dearly missed. Bill is preceded in death by his parents; and his first wife of 40 years Ruth Jones Hardison and second wife Pheba Cottrell Hardison. Bill is survived by his daughters: Kathy Hardison of Columbia, TN and Joni (Stuart) Lenig of Columbia, TN; grandson: Jay (Andrea) Jewell of Christiana, TN; great-granddaughter: Bailey Jewell of Christiana, TN; step-daughter: Dale Sagona (Frank) of AZ; and step-granddaughter: Danica (John) Walters of AZ. A private visitation and graveside service will be held Wednesday, December 30, 2020, at Polk Memorial Gardens in Columbia, TN. Williams Funeral Home is assisting the family with arrangements. Condolences can be given to the family online at www.williamsfh.com

The family of William Horace Hardison Jr. created this Life Tributes page to make it easy to share your memories.

Send flowers to the Hardison family.