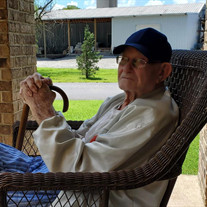 William Washington Mosley, age 87, passed away May 20, 2021 in Pulaski, TN surrounded by his family. William was born November 22, 1933 to the late Louie and Ellar Mosley in Mt. Pleasant, Tennessee. William was married to the love of his life, Ive, for 65 years. He was smitten with her the first time he ever laid eyes at the skating rink. She was there with her kid sister and he asked to go for a ride, and she declined. The next night, she went back alone, and he asked her again to which she accepted. They went for a ride and ended up going to the drive-in movie theater, which was their very first date. Later, they went on to have a daughter, Wanda. William took his daughter wherever she could go with him. They were joined at the hip and very rarely separated. William was a hardworking man, always on the move in his garage, either fixing or building whatever came to his mind. When he wasn’t in his garage he was out, tending to his garden. William was very helpful in every way possible, and would try to do all he could for his friends and family. William was preceded in death by his parents; brothers: Marvin Mosley and Calvin Mosley; and sisters: MaryAnne Mosley, Edna Beard, and Mildred Potts. William is survived by his loving wife, Ive Mosley; daughter: Wanda (Allen) Gibson; granddaughter: Nicole (Mark) Sauls; and a host of nieces and nephews. A memorial visitation for William will be held, Tuesday, May 25, with the family receiving friends from 3:00 PM until 6:00 PM at Williams Funeral Home in Columbia, Tennessee. Williams Funeral Home is assisting the family with arrangements. Condolences can be given to the family by visiting www.williamsfh.com

William Washington Mosley, age 87, passed away May 20, 2021 in Pulaski, TN surrounded by his family. William was born November 22, 1933 to the late Louie and Ellar Mosley in Mt. Pleasant, Tennessee. William was married to the love of his life,... View Obituary & Service Information

The family of William Mosley created this Life Tributes page to make it easy to share your memories.

Send flowers to the Mosley family.