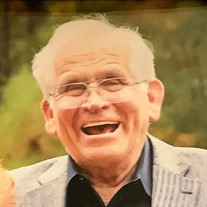 Willie “Will” Hugh Moore, age 90, passed away on August 25th, 2021 in Nashville, TN. Born October 19th, 1930 in Finger, TN to the late William Andrew Moore and Lessie Belle, the youngest of six children. Will left Bethel Springs, TN in 1948 at age 18 to move to Memphis, TN where he met his life-long love, Bobbie Rebecca Scoggins. Will joined the Air Force in 1951 during the Korean War. On September 2, 1951, he married his “Red”. They shared 70 beautiful years of matrimony. While Serving in Roswell, New Mexico he became a father for the first time to the late Debbie Moore Hannah (George Hannah) aka #1. Later Linda Moore Fleming (the late Mark Fleming) aka #2 and several years later his last child Beth Moore Dunn (Louie Dunn) aka #3. Will was blessed with 11 grandchildren and 21 great-grandchildren. Will earned the rank of Master Sergeant serving in the Air Force National Guard after completion of active duty, in total, serving his country 17 years. After Active Duty, Will became a Master plumber and owned his own company in Memphis, TN – Will Moore Plumbing. He was a great boss, making sure his workers were well taken care of. Even taking them out to lunch every day to make sure they were fed. In the late 1980s, Will and Bobbie went as home missionaries to the Tennessee Baptist Children’s Home, where they served as Houseparents at the Davis Cottage for 13 years. Raising, loving, and caring for the many children whom he considered his own. Will Moore was a faithful follower of Jesus Christ from the age of 20. He and his family were members of Germantown Baptist Church in Memphis from 1968-1986. While there, he served as a Chairman of the Deacon and as the Chairman of the bus committee. Will Moore was an honest and faithful man. He Loved Big. Gave everything he had to those he felt needed it more, spending his whole life helping other people. He was a great dad, filling his home with daily laughter. “Well Done, Thou good and faithful servant. Heaven is rejoicing, See you in Heaven.” – Red, #1, #2, and #3 The Moore family will receive friends and visitors Saturday, August 28th, 2021 at Williams Funeral Home beginning at 12:00 Noon. Funeral Service will follow at 2:00 PM, with Dr. Ken Story officiating. Will be laid to rest at West Tennessee State Veterans Cemetery. American Legion Post 19 will be rendering Military Honors. Williams Funeral Home is assisting the family with arrangements. Condolences can be given to the family by visiting www.williamsfh.com.

The family of Willie Hugh Moore created this Life Tributes page to make it easy to share your memories.

Send flowers to the Moore family.